Skip to main content
Use of cookies by Norton Rose Fulbright
We use cookies to deliver our online services. Details and instructions on how to disable those cookies are set out at nortonrosefulbright.com/cookies-policy. By continuing to use this website you agree to our use of our cookies unless you have disabled them.
OK 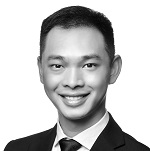 Ji En is a dispute resolution lawyer based in Singapore. His practice is focused on commercial litigation, international arbitration and alternative disputes resolution.
Prior to joining Ascendant Legal, Ji En spent two and a half years at a local disputes firm which provided him with extensive advocacy experience in both civil and criminal disputes resolution. During that period, he argued in the Singapore High Court and Court of Appeal, and worked with leading Queen’s Counsel on various complex and high profile matters.

Ji En is also one of the leaders in the legaltech and legal innovation scene in Asia-Pacific. He is the Deputy Chair of the Asia-Pacific Legal Innovation and Technology Association, and he speaks regularly on issues related to technology and innovation in law. He also sits on the Working Group formed by the Singapore Computer Society and Singapore Academy of Law to help the Singapore government develop strategies for the legal workforce in view of technological disruption in the industry.

Ji En graduated on the ASEAN Scholarship with a Second Upper Class Honours (L.L.B. Honours) from the National University of Singapore in 2017, and was admitted to the Singapore Bar in 2018. He is fluent in English, Chinese, Cantonese and Hokkien, and is proficient in Malay.